During the period from 1986 to 2005, I did a lot of traveling out West and elsewhere. These were the years when Sue and I took many trips to the western national parks, California, and Oregon, and when I drove across the country several times with my father. 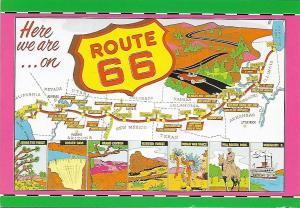 I spent some time not long ago browsing through the postcards I had collected during those 20 years. I discovered that I had amassed quite a collection, about 250 postcards and notecards. As a winter project, I decided to scan them all and (of course) organize the images.

I began collecting postcards as a way of creating a record of those trips. I’ve never managed to keep a travel journal for very long. I did so on several of my trips with Dad and on my month-long bicycle trip down the Pacific Coast. I didn’t have a portable computer back then to make journaling easier, and at the end of a day about the last thing I felt like doing was writing. Sometimes even scribbling just a few notes seemed like too much of an effort.

However, I knew that if I didn’t record those trips somehow, my memory of them would fade and the details would be lost. I figured I could at least manage to fill out a single postcard each evening. So I got into the habit of buying one for each day of a trip. On it I noted what we did that day, where we stayed, what we ate, and any other details I wanted to remember.

At first, I began sending the postcards home from the road. But to ensure that the cards wouldn’t get lost or damaged in the mail, I stopped doing that. Not addressing and stamping them also left more space to write my notes.

I bought many of the postcards to supplement the photographs I took. I didn’t have a digital camera back then, so every photo had a cost in terms of film and processing. And until the film was developed, I couldn’t see how well or poorly the shots had turned out. So postcards served as backup images, and they often provided better views of places or lodgings than I could take myself.

I ended up filling a three-ring binder with archival pages containing postcards from our trips. The plastic pages are transparent, so we can read the notes I’d written on the cards as we flip the pages. Organized by trip, these postcards provide a nice way to help us remember and relive a vacation. We sometimes browse through them before revisiting a place to look up the number of a room we especially liked in a historic lodge or the name of an eatery we enjoyed.

Below is a representative sampling of this collection. It was hard to select just a few out of 250, but I think these cover the full range of the kinds of cards I collected over two decades worth of travels.

Even small cities like Fairmont, Minnesota (seat of Martin County) proudly promoted themselves with postcards.

For a toll of $5 you can still drive through this redwood tree near Klamath, California.

Just west of Palm Springs in Cabazon, California, these may be among the most filmed and photographed dinosaurs in the country.

Roswell, New Mexico, makes the most of its alleged encounter with aliens in 1947.

This vintage postcard shows Mammoth Hotel, one of the earliest hotels in Yellowstone National Park. All that remains of it today is the wing at the far right.

Multnomah Falls and Lodge in Oregon’s Columbia River Gorge in 1930. Except for a footbridge that now crosses in front of the base of the falls (and the vehicles), this view hasn’t much.

These “auto-stages” at Paradise Inn in Mount Rainier National Park transported people between the park and nearby cities in the early 20th century.

Thomas Jefferson’s face being sculpted into Mount Rushmore in the Black Hills of South Dakota.

Crater Lake Lodge opened on the rim of Crater Lake in Oregon in 1915. The deteriorating building was completely dismantled and reconstructed in the 1990s. The resulting lodge, which replicates the original, appears in a postcard below. 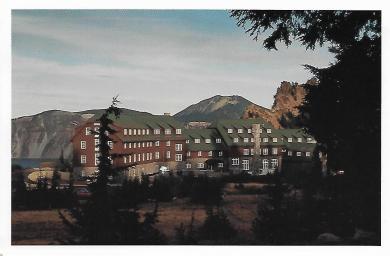 The reconstructed Crater Lake Lodge in Crater Lake National Park opened in 1995. It looks almost exactly like the original lodge, which appears in a postcard above.

The Great Hall in Crater Lake Lodge closely recreates the 1920s appearance of the original lodge.

The Columbia Gorge Hotel near Hood River, Oregon, opened in 1921 and sits at the edge of the Columbia River Gorge. Its “World Famous Farm Breakfast” is not to be missed.

Perched on the edge of a ravine, the Oregon Caves Chateau in Oregon Caves National Monument is one of the lesser-known historic lodges in the national parks system. The Swiss chalet–style lodge still looks much like it did when it opened in 1934. 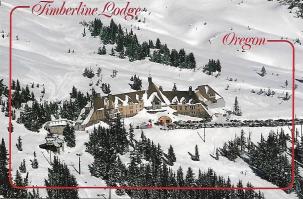 The Timberline Lodge on Mount Hood in Oregon famously appeared as the Overlook Hotel in Stanley Kubrick’s film “The Shining.” The rustic interior looks nothing like the hotel in the movie.

The Sylvia Beach Hotel (named after a woman, not a beach) sits on a bluff overlooking the Pacific in Newport, Oregon. Each uniquely designed guest room is named for a famous author—from Shakespeare to J.K. Rowlings—and its decor evokes that person’s literary works. 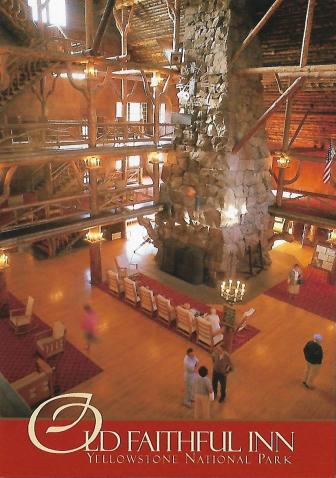 The great hall of Old Faithful Inn in Yellowstone National Park. Possibly the largest log building in the world, the inn opened in 1904 and established the rustic design motif found throughout the national parks.

We had the good fortune to stay in the Gallatin Gateway Inn, a lovely Spanish-stucco style hotel in Gallatin Gateway, near Bozeman, Montana. Sadly, it closed its doors to the public in 2013. It is now occupied by a private club.

The interior of the Gallatin Gateway Inn. Built near Yellowstone National Park by the “Milwaukee Road” railroad in 1927, the hotel was restored to its former glory in the late 1980s.

The elegant Prince of Wales Hotel in Canada’s Waterton Lakes National Park lies just across the international border from Glacier National Park. An arrow stuck on this postcard indicated the window of the room we stayed in—the lighted window in the gable to the far right—which overlooked the lake. 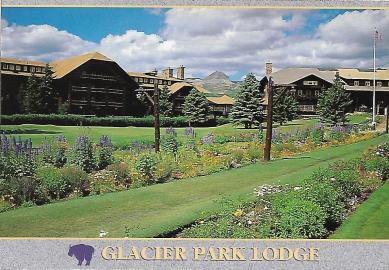 Glacier Park Lodge is one of several impressive Swiss chalet–style rustic lodgings in Glacier National Park in Montana, all built by the Great Northern Railway in the early 1900s. The Amtrak railway station is just a short walk away.

A veritable forest of Douglas firs, each 4 feet wide and 48 feet tall, support the roof of the great hall in Glacier Park Lodge.

These vintage motor coaches, or “Jammers,” outside Lake McDonald Lodge have been taking visitors over Glacier National Park’s Going-to-the-Sun Highway since the 1930s. 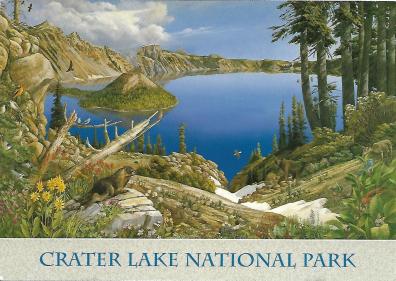 A painting of Crater Lake by Larry Eifert of Ferndale, California.

The Sylvia Beach Hotel in Newport, Oregon, sold notecards with drawings of each of its unique rooms. This was one of several we stayed in, the Robert Louis Stevenson Room. Note the treasure map, sea chest, and crutches. (Long John Silver’s?)

This is the Tennessee Williams Room, another we stayed in at the Sylvia Beach Hotel. Each room had copies of its namesake author’s books, and a visitor comment book you could browse through and add to.

Jennifer Lake Miller’s painting “Crater Lake Lodge” depicts the original lodge in the early 1900s. The artist herself appears to be at work at the lower left.

In 1871 artist Thomas Moran accompanied an early exploratory expedition to the Yellowstone region. It would become the world’s first national park in 1872, thanks in part to his paintings that showcased its wonders. This watercolor by Moran depicts “The Hot Springs of Gardiner’s River, Extinct Geyser Crater.” The height of the pillar-like deposit called Liberty Cap is greatly exaggerated.

Kerne Erickson has painted many retro-style images of Hawaii, including “Waikiki Beach.” That’s the famous Royal Hawaiian Hotel (the “Pink Palace”) in the background.

This painting by Monte Dolack celebrates “Restoring the Wolf to Yellowstone Park.” It shows several other species as well among the hot springs and geysers.

“Above San Francisco,” from the Cameron Collection, shows the northwest edge of the city, the Golden Gate Bridge, and the Marin Headlands and Angel Island in the background. 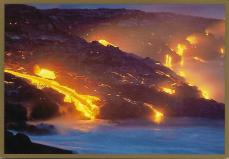 2 thoughts on “Postcards from the Road”